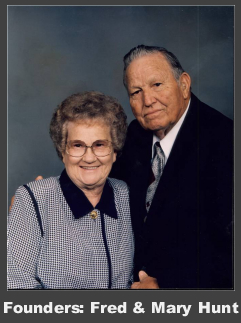 The Buildings & Properties that you see today were once just a vision. In 1987, Fred & Mary Hunt felt the call to begin a new work in Andalusia. So after much searching, seeking and praying the property was decided upon and purchased. After much thought, Andalusia Full Gospel Tabernacle became the name of this new church, better known as the "Old Tomato House." Our first service was held April 5th, 1987. We had 24 in Sunday School and 35 in Morning Worship. Bro. Hunt ministered the sermon "We may not look like much". With our wood slat (pinch) pews and no carpet we began to experience God move in mighty ways. 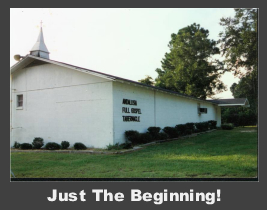 2000 began a new era. God had grown us to the place that a new sanctuary was needed. In February 2001 we had our first service in the new sanctuary. We also hired full time staff to lead and serve with us. WOW! "AFGT" was a church on fire. Guardian Angel Christian Academy was also established in 2001.
We have come a long way! With T.V. Programs, web pages, praise teams, and ministries for every age. "AFGT" declared that Andalusia will be the hardest place to go to hell from. We have not reached a stopping place. We must go forward! The blueprints say there is MORE to do!